I was recently asked to write a story about Phoenix Police motorcycle officers. I immediately began to put together background information and stories I’d gathered from the Association of Retired Phoenix Officers, its website and some old internet articles about Indian and Harley-Davidson police motorcycles. This is when I discovered a mystery that definitely needs solving. Let me explain.

While spending endless hours scanning photos last year at the Phoenix Police Museum, I came across several 1973 photos of former Chief of Police Larry Wetzel recognizing Harrison M. Williams as being the very first Phoenix Police motorcycle officer. In 1973, Williams was 80 years old when he told his story to an Arizona Republic reporter. He said he joined the Phoenix Police Department in 1911, when he was only 18, but had lied about his age, saying he was 21, or at least everyone assumed he was 21. That was the minimum age required to be a police officer then. While other officers were walking, riding bicycles or horse-drawn carriages, Williams patrolled the streets on his M&M belt-driven cycle, he said.

Phoenix Police Chief A.J. Moore had invited Williams to join the Department and bring his cycle with him, the article continued. Williams was issued a standard .45 caliber Colt revolver, and with no training whatsoever, was put to work for $100 a month, a healthy salary back in those rough days. The downtown area had a saloon in every other building, Williams described, but downtown Phoenix was surrounded by farmland and dairies.

He would have to ride cautiously on the sometimes very muddy streets because the roads weren’t paved at the time, he said. Williams used to tell his grandchildren a somewhat “tall tale” about how one day he was walking down the board-covered walkway on a rainy day and reached down to pick up a man’s Stetson hat. He was surprised to see a man’s head underneath the hat, and below that the man’s body and his horse still under him.

Around 1914 or 1915, the new County Sheriff offered Williams a $25-a-month raise to lateral over, which he quickly did. Given his choice of a new motorcycle, Williams chose a chain-driven Indian cycle, which he ended up driving all over the state of Arizona as a deputy sheriff.

Like everyone else who read this 1973 article, I had no problem believing that Williams had to be the first Phoenix motorcycle officer. But as I continued my research, Kathy Bell at the Phoenix Police Museum located an article, “Who Was the First Phoenix Motor Officer?” written by Kenneth Arline for a Phoenix Police newsletter. It identified Jerry “Missouri” Thompson as the first Phoenix motorcycle officer. According to Arline’s research, “Missouri” Thompson was hired in 1910 to enforce Phoenix’s new Ordinance Number 406, which limited speed on all downtown city streets to 10 mph and 12 mph elsewhere. A couple of days before enforcement began, Phoenix newspapers advised residents that enforcement of Ordinance 406 would begin soon:

“The motorcycle cop will follow after automobiles and watch the speedometer on the cycle. When he finds the indicator creeping up to 15 or 20 mph he will shoot ahead and stop the car, take the names of the occupants and politely ask them to appear at the police station at the earliest possible time.”

S.J. Tribolet of Tribolet’s Cold Storage was the first to fight a speeding ticket in court, according to Arline. Officer Thompson testified before Judge Frank Thomas that he was 10 feet behind Tribolet when he clocked him doing 20 mph on Second Street, from Taylor to Monroe Street in downtown Phoenix. Officer Thompson also testified that when Tribolet slowed down at Monroe, he passed a hay wagon and caused a bicyclist to jump off his bicycle to avoid being struck by the car. Tribolet denied he was speeding and accused the officer of inexperience in “catchin’ fellers.” Judge Thomas found Tribolet guilty and fined him $15.

One of the first to beat a speeding ticket, Arline wrote, was Louis Sands of Glendale. He admitted doing 18 mph on Grand Avenue, on his way to an emergency at his farm, where an employee had died. Mr. M.W. King was the first person to go to jail in lieu of paying the $15 fine for speeding.

Speeding in the downtown area apparently was a big issue because the newspaper frequently reported merchants’ and pedestrians’ complaints about the 10-mph speed limit, which nearly every delivery wagon in town seemed to violate.

I have also located newspaper articles written about Officer Nick Papo, who is identified by his family as having been the first Phoenix motor officer. I am told a 1914 photograph shows Papo on a Phoenix Police motorcycle. I haven’t found that one yet, although his obituary in the newspaper also identified him as being the first. More research needs to be done on Papo.

However, I also came upon other old photos of Phoenix Police Department officers and motorcycle officers.

So, the mystery remains. What else might I find? Will the real first Phoenix Police motor officer please stand? I’m betting on good ol’ “Missouri” Thompson, but who knows what else might be out there that I haven’t stumbled upon yet? As I search through the thousands of photos in the Phoenix Police Museum files, not a day goes by that something interesting doesn’t pop out at me. I will continue this story as I move along through “motor” history. I just finished scanning all the photos on file for Phoenix’s “Most Famous Motor,” Ernie Littlefield. Or was he the most famous? The Museum has a photo of Littlefield standing on his motorcycle with his arms outstretched. But I remember Glenn Martin, a 1940s and ’50s motor, telling me he had done a handstand on the handlebars of his bike while driving the city’s streets. More on that in future articles. I can’t wait for the stories that await me. If you have any stories or information, please email them to me at ereynolds5@cox.net and I will consider them for future chapters on the “History of Phoenix Police Motors.” 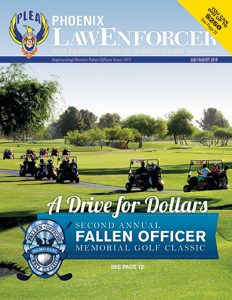