On September 7th, 1984, Officer Forsythe was killed in a traffic accident while working off-duty. He was directing traffic when he was stuck by a semi-truck and killed. Officer Forsythe was a seven year veteran of the Phoenix Police Department and active in the police officers union. He was thirty-five years old at the time 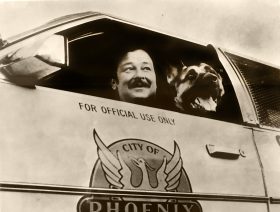 K9 Roscoe was struck and killed by a vehicle after assisting his handler apprehended a subject. Roscoe’s handler had been attempting to arrest a drunk driver when Roscoe jumped from the patrol car to assist. His handler ordered him to return to the car, at which point he was struck by an oncoming vehicle.

On May 4th, 1984, Motorcycle Officer Polmanteer was killed in a head on collision with a van that turned in front of his motorcycle two weeks after Officer Hawkins death. Officer Polmanteer had been a police officer for fifteen years, five of which were with the Phoenix Police Department. He was thirty-seven years old at

On April 24th, 1984, Officer Hawkins was killed by a passing pickup truck. He was on a nighttime undercover assignment attempting to cross a freeway frontage road when the accident occurred. Officer Hawkins helped establish a hostage/barricade negotiations unit and was a negotiator in hostage situations. He was thirty-four years old at the time of

On January 29th, 1984, Officer Campbell was killed while in pursuit of a speeding motorcycle. The accident occurred when his patrol car skidded out of control and collided with another vehicle. Officer Campbell had been a member of the Phoenix Police Department for three years. He was twenty-eight years old at the time of his

On July 1st, 1982, Officer Davis and his partner, Ignacio Conchos, entered a Phoenix bar in search of a bank robbery suspect. Both officers were mortally wounded when the suspect began shooting inside the bar. Officer Conchos died a short time later. Officer Davis died one month after the shooting. He was a twelve year

On July 1st, 1982, Officer Conchos and his partner, John Davis, entered a Phoenix bar in search of a bank robbery suspect. Both officers were mortally wounded when the suspect began shooting inside the bar. Officer Conchos died a short time later. Officer Davis died one month after the shooting. The Veterans of Foreign War

On April 22nd, 1976, Officer Del Gaudio was killed while in the pursuit of an impaired and reckless driver. The officer collided with another police car and then careened into the wall of a home. His death was instrumental in persuading the State Legislature to enact the Unlawful Flight statute. Officer Del Gaudio was twenty-six

On February 22nd, 1976, Police Guard MacInnis died of a heart attack while in foot pursuit of a suspect at the Sky Harbor International Airport. A passerby stopped to assist the guard. He was driven to a nearby hospital but was pronounced dead on arrival. He had been a police guard for nine years. Police